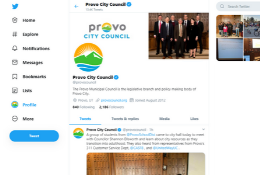 Council Meeting and Board of Canvassers

The Board of Canvassers will meet in the Council Chambers at 5:30 PM, immediately preceding the Council Meeting at 5:45 PM.

1. A presentation from the Provo Bicycle Committee of the Golden Spoke Award to the Police Department's Bike Patrol

2. An introduction of the new Provo Bay Neighborhood Chair

Fifteen minutes have been set aside for any person to express ideas, concerns, comments, or issues that are not on the agenda:
Please state your name and city of residence into the microphone.
Please limit your comments to two minutes.
State Law prohibits the Council from acting on items that do not appear on the agenda.

3. A resolution authorizing the issuance and sale of up to $6 million aggregate principal amount of sales tax revenue bonds for the purpose of financing certain airport infrastructure facilities; and related matters. (17-113)

4. A resolution appropriating $11,529,568 in the Airport Fund, Airport Improvement Project Division for funding infrastructure improvements to the airport applying to the fiscal year ending June 30, 2018. (17-112)

5. A resolution authorizing the execution and delivery of a Tax Increment Pledge Agreement and a development agreement relating to the construction and financing of certain airport infrastructure facilities; and related matters. (17-114)

6. A resolution approving an Environmental Assessment and a proposed Land and Water Conservation Fund Property Conversion. (16-113)

8. An ordinance granting Mobilitie a nonexclusive franchise in order for it to operate a telecommunications network in Provo City, Utah. (17-107)