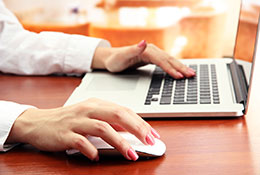 Work Meetings and Council MeetingsVideos of the Council's budget discussions during work meetings and regular meetings can be watched on demand. Supporting materials are also linked to the agenda items on our public documents site. For the fiscal year 2020-2021 budget, departments were asked to make some budget presentations in the months leading up to delivery of the actual proposed budget. 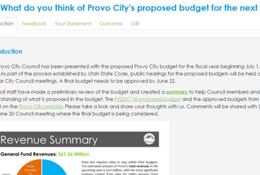 Council staff have prepared a preliminary review of the budget and created a summary (Citizens Budget) to help Council members and the public quickly gain an understanding of what is proposed in the budget. The public wass invited to review the information and share their comments in Open City Hall.

3. A resolution authorizing the Mayor to execute a Conservation Easement Agreement regarding Provo City property located near the Rock Canyon trailhead. (17-085)

4. A resolution authorizing the Chief Executive Officer of the Provo City Redevelopment Agency to modify certain contracts with NeighborWorks Provo. (18-076)

5. A resolution designating a survey area, authorizing the preparation of a draft Community Reinvestment Project Area Plan and Budget, and authorizing and directing all necessary action by the agency, staff, and legal counsel. (19-050)

6. An ordinance amending Provo City Code to establish an Officer Rank of Deputy Chief of Police (19-048)

7. A resolution appropriating $2,490,000 funded by lease financing in the Vehicle Replacement Fund for the purchase of two fire apparatuses and related equipment applying to the fiscal year ending June 30, 2019. (19-043)

9. An ordinance amending the Zone Map Classification of approximately 3.7 acres of real property, generally located between 500 S. to 600 S. and from 100 W. to University Ave. from ITOD to Mill Race PRO Zone. Downtown Neighborhood. (PLRZ20190047)

12. An ordinance amending Provo City Code regarding the Board of Adjustment to comply with State Code. City-wide application. (PLOTA20190097)

13. An ordinance amending Ordinance 2019-01, previously approved on January 22, 2019, with regard to the development agreement required in order for a zone change at 2300 N. University Pkwy to become effective. Carterville Neighborhood. (PLRZ201800406)