Provo is consistently recognized nationally for its outstanding quality of life, well-being, and as a beautiful place to live with unbelievable recreational opportunities. With access to trails, rivers, mountains, lakes, variety of independent restaurants, bike lanes, green space, vibrant music scene, and amazing community events - Provo has it all. Check out the latest Provo Rankings and Achievements in the list below. To view a full list of Provo accolades, click here » 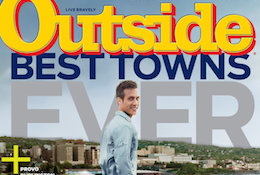 #2 GREATEST PLACE TO LIVE IN AMERICA Provo City is ranked as the #2 greatest place to live in America! So what makes a best town ever? According to Outside Magazine – access to trails, rivers, mountains, and lakes, healthy eating, bike lanes, and green space are some of the main factors. Provo has all of these factors and more. Learn more here » 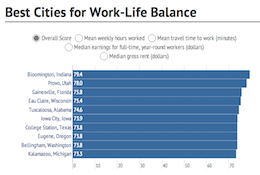 #2 FOR BEST WORK-LIFE BALANCE NerdWallet has ranked Provo #2 for Best work-life balance! According to their numbers, employees in Provo enjoy an amazing work-life balance. Out of all 536 cities in their study, Provo received the lowest average weekly hours worked per person. Learn more here » 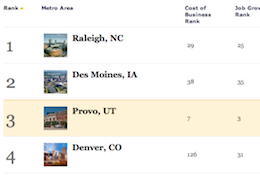 #3 FOR BUSINESS AND CAREERS It’s great to be recognized for hard work.Forbes ranked Provo, Utah #3 for Best Places for Business and Careers. Provo leads a trio of Utah cities with Salt Lake City at #8 and Ogden ranked #11. Provo’s job growth was tops in the country last year at 5.3%, it ranks seventh best over the past five years, and the unemployment rate is a microscopic 3.2%. Learn more here » 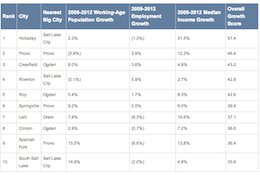 #2 UTAH’S FASTEST GROWING CITY According to NerdWallet, Provo is #2 among Utah’s fastest growing cities! NerdWallet crunched the numbers for the 33 cities in Utah with more than 20,000 residents to find the cities experiencing growth in jobs, income and population. Their analysis examined the following growth metrics from census data: population growth, employment growth, and income growth. Learn more here » 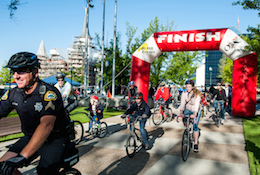 9TH HIGHEST CYCLING RATE IN THE NATION The U.S. Census Bureau released a report just in time for National Bike Week ranking Provo’s cycling rate among mid-size cities (with populations between 100,000 and 200,000 residents) the ninth highest in the nation! We even beat out Salt Lake City who was ranked 11th. Learn more here » 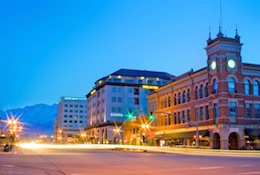 #1 FOR FASTEST-GROWING ON-THE-RISE STARTUP HUBS That’s right, another #1 Ranking! Provo has been ranked #1 for the fastest-growing on-the-rise startup hub! SpareFoot went fishing to find out which of these “far-flung places” are rocking the boat and wound up netting a list of America’s Six Fastest-Growing On-the-Rise Startup Hubs. Learn more here » 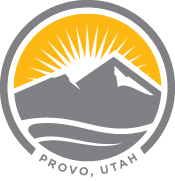