By law, the ultimate responsibility for planning and responding to disasters rests with Provo’s Mayor. To enhance communication and coordination, the Mayor has appointed three committees with operational and planning responsibilities for emergencies.

The Hazards Subcommittee works closely with the Executive Committee and provides specific direction on the various emergency hazards in Provo including seismic activity, weather related hazards (flooding, snow and ice emergencies, wind events), wildfire, debris flow, and terrorism. This committee has representatives from Public Works, Police, Fire, Energy, and Parks and Recreation. Basic responsibilities include: The Resources Committee also works collaboratively with the Executive Committee and provides access to various resources that would be needed in the community in case of a disaster. The committee is composed of representatives from city departments such as finance, information systems, human resources, and community development as well as from community-based organizations. This committee is charged to: 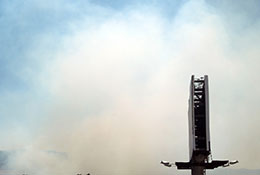 
The City of Provo has a comprehensive plan for dealing with emergencies and disasters within Provo. The plan is based on three levels of emergency and addresses steps to be taken depending on the severity and the geographic area of the emergency. The plan is reviewed annually and updated under the direction of the Emergency Management Executive Committee.

Emergency Alerts in Provo
When there is an emergency situation in Provo, there are a number of systems in place for alerting the public about the danger and what they should do about it.

Radio. The primary method of alert is the statewide Emergency Broadcast System. In case of an emergency, the Mayor has the authority to activate the system for Provo. For statewide emergencies, residents should tune to KSL radio (1160 AM or 102.7 FM). For emergencies localized to Utah County or Provo, emergency alerts are made on KBYU (89.1 FM).

Sirens and Speakers. The City has installed and controls the activation of emergency alert sirens in downtown Provo and sirens and speakers in the Riverbottoms neighborhood. If you hear the sirens, you should listen to the radio stations listed above, or (in the Riverbottoms) listen following the siren for an audible announcement on the speakers. In addition, police vehicles equipped with sirens and loudspeakers may be moving through the area with audible messages.

Provo Channel 17. The City has the capability of live broadcast from the City Center and from the Media Services studio. Emergency alert notices will be placed on Provo Channel 17, which is also streamed online.

City Website. Emergency alert notices will also be placed on the Provo city website at provo.org during an emergency.

Citywide Notification System. The City is working to secure funding for a citywide notification system. This system would allow residents to register for warning via email, phone call, cell call, text message or instant messaging. It would also allow the City to call all phones at addresses within a given radius of an emergency via GIS mapping capability.