Why Have a Sister City?
Provo City and its programs have become an important and positive force for peace by promoting understanding and respect among nations.

On the individual level, there are opportunities for personal development, new friendships, and new challenges to understand the world around us.

On the municipal level, the exchange of experiences between cities, who may be facing similar problems, leads to new ideas and unique solutions, while at the same time enjoying the pride of one's own community.

On the national level, the more personal contact with American citizens helps to correct any distorted impressions of the people and life in this country often held by people of other nations. This process also works in reverse for us.

Meissen, Germany The city of Meissen has a natural tie to Provo, it being the home of Dr. Karl G. Maeser, a prominent founder of Brigham Young University.

The Maeser family took the lead in formulating the Sister City Relationship, which was established in July 2001.

The city of Meissen is over 1000 years old. It lies on the River Elbe and is known the world over for its beautiful porcelain, which is identified by the distinctive trademark featuring two crossed swords. 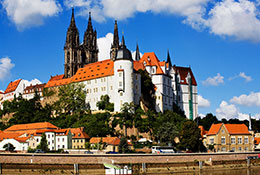 Since its inception in 2001, there have been exchanges every other year, this year being the 7th exchange.

It has become a tradition for the Provo City Municipal Council to host the Meissen students & teachers and their host families for a pizza party during their visit. In 2013, it was held at the new Provo City Recreation Center where the students were able to use the recreation facilities following dinner.

It is located in southeastern China on the Vietnam border. It is the home of the Nanning International Folk Song Art Festival held in the fall of each year.

Most recently, in September of 2013, Mayor John Curtis, Municipal Council Chairman Gary Winterton and businessman Tracy Rogers attended the Nanning International Folk Song Art Festival. They also participated in the Guangxi Garden & Horticulture Expo and toured the China -ASEAN Expo. The delegation was privileged to have a personal meeting with Mayor Zhou Hongbo.

Mayor Curtis was asked to present a slideshow at the 2013 Nanning International Sister Cities Exchange and Cooperation Seminar. The slideshow outlined Provo City's Transportation and Circulation Plan for the future.

The highlight of the trip was the delight expressed by their Nanning hosts when Mayor Curtis easily communicated with them in their own Mandarin language. 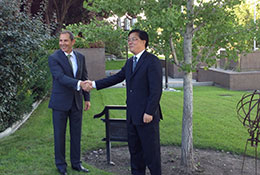 Mayor Zhou visits Provo The week following his return from Nanning, Mayor Curtis was delighted to host Mayor Zhou and his delegation of 6.

The Trade Mission helped to facilitate meetings between the management of companies from Utah and the management from companies in China who wanted to investigate becoming business partners.

Several companies from Provo participated in these "match making" meetings.

During meetings with government officials, Provo participated in signing a Memorandum of Understanding wherein it was proposed that the Jinniu District, Chengdu, Sichuan Province, Peoples Republic of China and Provo City intend to explore a friendship relationship for the purpose of promoting mutual understanding and economic, educational, scientific and government exchanges. This MOA will be valid until September of 2018. During this time, both sides will work together to determine the validity of establishing a formal Friendship City relationship.