Construction on the Cougar Boulevard project is mostly complete and minor activities such as concrete repair and landscaping are ongoing as weather allows. Watch for crews working in or near the roadway. Follow all posted speed limits and pedestrian signs.

Buffered bike lanes will be open on November 4. Note that green paint highlights areas where the paths for bicycles and motor vehicles cross. These are also locations where vehicle traffic crosses the sidewalk. Please look for bicycles and pedestrians when crossing over a green painted area.

Construction updates sent via the project email will resume in spring 2020. Contact the project communications team anytime by calling 888-966-6624 or emailing provobulldogblvd@gmail.com.

Since spring, crews have:

Bulldog Boulevard has a severe crash rate that is 7.5 times higher than the statewide average for similar roadways. There are also a significant number of bicycle crashes because of a lack of adequate bicycle facilities. Provo City and UDOT are partnering to increase safety by adding raised medians and protected bicycle lanes. The project plans to convert one travel lane in each direction to bicycle lanes with physical or painted buffers to separate bicycles from vehicular traffic.

The concept of adding bicycle facilities on Bulldog Boulevard was generated during the 2013 Provo City Bicycle Master Plan process, which was approved by City Council. Following the recommendation from the Bicycle Master Plan, Provo City commissioned a traffic study in 2014 to determine if and how those facilities might be incorporated on this critical east/west corridor. The initial study conducted traffic counts during the morning and evening commutes, when Brigham Young University was in session, then factored in growth projections for the year 2040. This study confirmed that conversion of the outside lanes to bicycle lanes would not significantly increase traffic wait times throughout the corridor.

An additional traffic study was completed in late 2017 to verify this and make recommendations to begin developing the project design plans. The 2017 study found that the planned project changes described below will increase the morning eastbound commute by approximately 4 seconds and the westbound evening commute by approximately 40 seconds (at 2040 traffic projections).

Based on the 2017 traffic study, the project design converts the outside travel lanes to protected bicycle lanes, adds dedicated left-turn lanes at the 500 West intersections with State Street and University Avenue, and adds a new signalized intersection at 400 West to maintain access to the Riverside Plaza complex on the northeast corner of Bulldog Boulevard and 500 West. Click here to view the final project design.

Driveways, intersection turning pockets and other areas where bicycles and vehicles must cross paths will be defined for increased awareness and safety. Motorists accessing businesses on the opposite side of Bulldog Boulevard will still be able to safely make left turns and U-turns at any of the existing intersections. Traffic signal timing will be adjusted to accommodate the additional U-turns and other traffic pattern changes.

Landscaping will be added in the medians where space allows and will include rock, shrubs and trees similar to those found on Center Street between 900 West and 600 West. Median landscaping will be maintained by the Provo City Parks Department. 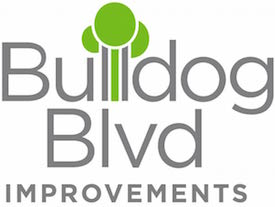